Welcome to the Cape Town Military Tattoo 2010, organised by the Defence Reserves of the Western Cape

In barely two weeks’ time, the imposing stone walls of the venerable 330-year-old Castle of Good Hope in central Cape Town will be reverberating to the rhythmic thumping of drums, the wailing of bagpipes and the echoing boom of live gunfire, as the oldest military headquarters in the country hosts the sixth Cape Town Military Tattoo 2010.

One of the not-to-be-missed highlights of the Cape Town calendar, the Tattoo has proved so popular among locals and visitors that it has now become an annual event, from its humble beginnings in 2003. This year’s event is the 6th, as there were two gaps in-between. The sell-out success of the last years (2007, 2008 and 2009) has even persuaded organisers to extend the Tattoo by a day: This year, the nightly performances will take place from Wednesday 3 November to Saturday 6 November 2010.

The Castle is a fairly ‘small’ venue, in that they ‘only’ had something like 1200 seats the previous year(s) and there were only three performances. So this year they’ve added another night, and about 300 more seats to their stands, to accommodate more people. I hope they’re going to sell out this year too! 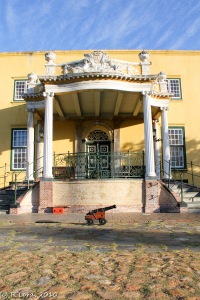 The beautifully decorative Kat balcony, with a small 2lb cannon in front

The main theme of this year’s tattoo is ‘Come Home to Africa’, with the sub-theme being ‘A Tribute to the Unsung Heroes’. This is an acknowledgement of all the men and women of the military support services, who provide combat support.

The familiar and much-loved stalwarts of the more than 2-hour-long programme are participating this year too, such as the SA Army Band of Cape Town and the SA Army Band of Kroonstad, and the Pipes and Drums of Cape Field Artillery and of 1 Medical Battalion Group. In addition, spectators will also be entertained by the Rwanda Army Band, the Drum Majorettes from Curro Private School with their twirling batons, and the SAPS Mounted Unit with their powerful steeds.

Let us not forget the Castle Ceremonial Guard who perform the Key Ceremony at the beginning of the show, when the massive gates to the Castle are locked. Or the wonderful chaps in period costume (the Cannon Association of South Africa and the SA Muzzle Loaders Association) who fire their muskets and 2 lb cannons from the ornamental Kat balcony with such devastating effect! As in previous years, Tchaikovsky’s 1812 Overture will be performed, as it should be – to the accompaniment of live gunfire from the Cape Field Artillery’s ceremonial 25-pounder guns!

This year, however, there will be an additional event: a breath-taking mock attack on the Castle to illustrate the role of the medical support!

Brace yourselves to be swept away by marvelous music, dazzling costumes, and thrilling displays of military power!

The main show starts at 20h00, but the Castle will open its gates to the public at 18h00 every evening. Safe parking will be available on the Grand Parade in front of the Castle. Refreshments will be on sale at the De Goewerneur Restaurant.

This year, for the first time, spectators who arrive early will also be treated to some exciting pre-show performances of youth groups, such as the Sea Cadets and the drill squad from the Western Province School Marching Drill and Exhibition Association.

In June and July this year, the Defence Reserves showcased their involvement with skills development among the youth in Cape Town, by putting together an exciting programme involving five talented youth groups who performed at the Castle during the 2010 FIFA World Cup: the Portlands High School Field Marching Band, the Eerste River Youth Brigade, the Malibu Drum Majorettes, the South African Sea Cadets and the Limited Edition Drum Corps.

Capt John Manning, the announcer at the Tattoo, in conversation with Mr Matt and Karin Theunissen

Maj Wessels gives some background to the Tattoo

During the recent mid-term school holidays, a group of youngsters from various schools in the Western Cape were selected and trained by the SA Army Band Cape Town; these have combined forces to make up the drill squad from the Western Province School Marching Drill and Exhibition Association, which will be entertaining Tattoo audiences before the main performance begins at 20h00. You can find out more about the WPSMDEA via these links:

On Tuesday, 19 October 2010, the much-anticipated media launch for the Cape Town Military Tattoo 2010 was held at the Castle of Good Hope. The journalists, reporters and photographers from various media (print, radio, television) were welcomed to the event by Maj JP Wessels (VIP Management and Guest Relations) and Maj Charles de Cruz (Producer), and we were then treated to a series of live performances.

First, the brave men and women of the SAPS Mounted Unit charged around the arena on their tempestuous and mighty steeds.

Thundering around the front courtyard 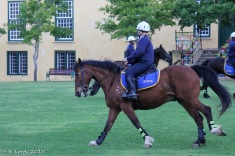 They are very well-trained and well-behaved 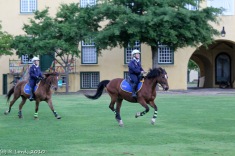 Thereafter, the SA Army Band Cape Town gave a magnificent and polished display of their musical and marching skills, once again showing why they are such crowd-pleasing favourites.

What a stunning backdrop of Devil’s Peak, Table Mountain and the centuries-old Castle!

They form up in front of the Kat balcony

Then the photographers and journalists were taken up close and personal to the muskets and the 2lb cannon. It was explained – and then demonstrated to spectacular effect – how the different muskets, including the so-called ‘Brown Bess’, the Blunderbuss and the Caplock rifle, are loaded and fired. That 2lb pound cannon may look rather small and insignificant close-up, but it packs a truly mighty punch! The thunderous report of the live gunfire thus created considerable excitement, as the echoes of the explosion reverberated around the front courtyard amidst clouds of cordite.

The muzzle-loaders from the Black Powder Association in period costume

Preparing to fire the 2lb cannon

Mr Jurg Zimmerman of the Cannon Association of South Africa fires the 2lb cannon, clearly demonstrating that this cannon should not be underestimated! 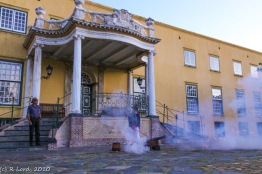 Thereafter, it was the turn of the Cape Field Artillery Pipes and Drums in their red tartan kilts and brown army jackets to join forces with the SA Army Band Cape Town, as they marched into the arena. They ended the evening’s show with a soul-stirring and truly goose-bumps inducing performance of ‘Highland Cathedral’. 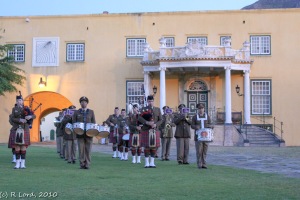 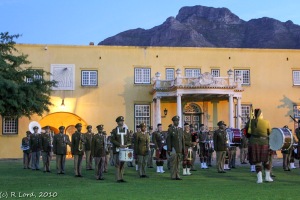 Their last piece is my favourite one: Highland Cathedral

CFA Pipes and Drums are led out by WO2 Steve Leibbrandt

After the show, we were all invited to a media briefing in the Het Bakhuys Officers’ Mess, with Lt Col Johan Conradie giving a short presentation on the Cape Town Military Tattoo 2010 and the performers that will be part of the event this year.

This was followed by refreshments in the tastefully decorated Dolphin Room overlooking the Dolphin Pool, which was lit up almost eerily in red. This was the perfect opportunity to socialise and engage in some networking.

Since bookings opened at Computicket last week, more than 700 tickets have already been sold, which is clearly testimony of the popularity of this event!

So, call up your friends, email your colleagues, make your travel plans, and book your seats!

Whatever you do, don’t miss the Cape Town Military Tattoo 2010!

The venue is the Het Bakhuys Officers’ Mess

I love everything about the Tattoo: the dramatic music, the surprises, the powerful horses, the amazing marching bands, the different types of military uniforms, the traditions, the sound and smell of the gunfire and musket fire, the pipers and drummers in their kilts, the spectacular old Castle all lit up under a starry night sky….

I love the mounting sense of excitement when you walk over from the parking area towards the Castle, and past those powerful 25-pounder ceremonial guns, through the lovely stone archway into the lit-up courtyard, with all the military guards on duty and the ushers who show you to your seats, and the bustle of many things happening, and the excited chattering of all the spectators before the show… the anticipation makes it difficult to sit still… so you go and queue for a cup of tea or coffee, and then of course you need to pee, so you go and queue at the toilets… and there’s excitable children running around and everyone has this gleam in their eyes…

And then the now familiar voice of the announcer, Captain John Manning, welcoming us to the Tattoo, introducing the different acts and explaining the traditions… Before you know it, you’re all swept up in the performance, as one act flows into the next, and you almost forget where you are, but then all the performers march on for the Final Muster, and you know that it’s going to end, all too soon, and you find yourself feeling quite sad and melancholy, and wishing you could go again the next night, but you know that’s kind-of-unreasonable and so you know that you’ll have to wait another whole year for the next Tattoo.

Update: An article I wrote about this event was published on the Reserve Force Division website. Here is the PDF document. 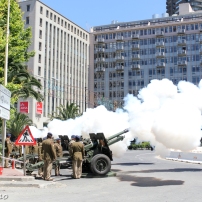 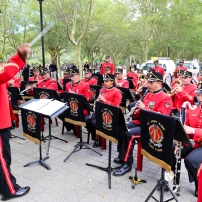 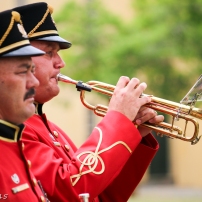 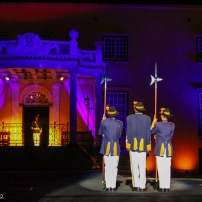